Many folks these days refer to latitude and longitude coordinates as GPS coordinates or GPS coords (or GPS cords) for short.  They also can be referred to as map coordinates, and have been so long before the advent of the GPS unit.  (GPS is an abbreviation for Global Positioning System.)

[ For mindset, an example of a listing of latitude and longitude coordinates is:  42.637310, -77.596007 ].  This coordinate notation method utilizes degrees in a full decimal notation or format.

[The same locale listed differently (using degrees ° , minutes ‘ , seconds ” and a decimal included within seconds) is: 42°38’14.3″N 77°35’45.6″W .  For sake of ease for right now, let’s stick with the full decimal form of degrees (which has 6 decimal places s listed above) for our first identification of latitude and longitude.]

In coordinates, latitude is listed first (and then longitude), so consider the coordinate listing system as alphabetical. And if you use the mnemonic “changes in latitudes, changes in attitudes”, as Jimmy Buffet proffers in his song, you can remember that changing of seasons and temperatures is associated with latitudes (thus further north or further south). Continuing further explanation, alphabetically North comes before South, and likewise North is over South, thus the southern hemisphere (southern latitudes) being below the equator has an assigned minus (-), while the northern hemisphere (northern latitudes) where we in New York & all of the US are has no preceding minus (-) in latitude.

In coordinates, longitude is listed second (read last). In longitude, the US is in the minus (-) half of longitudes, it lies west of the Prime Meridian. (The Prime Meridian is an imaginary north/south axis line labeled as longitude zero; it passes thru Greenwich, England the site of the Royal Greenwich Observatory.) Being that the continental US (and Hawaii, most of Alaska, and North & South America) lies to the West of the Prime Meridian, the US is in the western hemisphere and considered West Longitude. Again alphabetically, East is before West so logically the latter (West Longitude) gets a minus (-) assigned to it in longitude, while East Longitude (think Europe, Asia, Africa) has no preceding minus (-) in longitude.

What lies 180 degrees, half way around the globe from the Prime Meridian, you ask? Well, it is the antimeridian aka the 180th meridian aka 180th parallel. What about the “International Date Line” (IDL)? Well, the IDL roughly approximates the antimeridian, but deviates to pass around some island groups and territories. No time herein to start talking about “time zones”, but there are commonalities to meridians. What about Greenwich Mean Time (GMT)? Yep, related to that Prime Meridian, but again not talking about it herein.

Close to home, utilizing this latitude/longitude coding system in degrees and decimal, the “four corners in Springwater, NY” can be represented as approximately 42.637310, -77.596007   This decimal notation is but one of a number of ways to code latitude and longitude. Utilizing degrees, minutes, and seconds of measure is but another, and it is this system (degrees, minutes, seconds) that is more likely utilized on a traditional paper map.

You can see the latitude/longitude system as a type of grid. Visualizing can make for easy, “ah-ha” understanding. Cropped from an article, the latitude/longitude grid of the continental US (below) may help you to easily identify with the concept. The cropped segment is provided chiefly for viewing the grid, but if you wish you can take up on the accompanying prose, and even take a look at the article in entirety. The prose accompanying this grid does not utilize decimal listing of lat/long, it uses degrees, minutes (‘), and seconds (“). The decimal listing of lat/long is most easily utilized in a GPS unit geared toward driving destinations.

If you know more than you did before reading this segment, Great!, … and now you can consider it as a primer for when S/T hikes may utilize navigational coordinates (aka Lat/Long coordinates, aka GPS coordinates), … perhaps a future hike with a Geocaching or Orienteering component.

—- cropped segment of an article (below), including the lat/long grid of the US —-

It is worth taking a few seconds to memorize the following numbers. It will help you to use latitude and longitude more effectively: 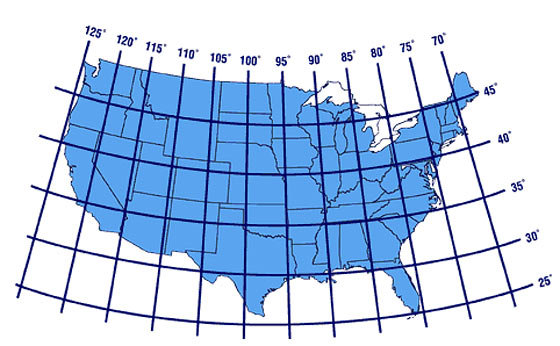 Example:Los Angeles34° 3′ 8″ N / 118° 14′ 34″ W34 degrees 3 minutes 8 seconds North / 118 degrees 14 minutes 34 seconds West
The map shown above only shows the major degrees. However as you can see, even the coordinates 34° N / 118° W will enable you to sight fairly quickly on the map where Los Angeles is located. If we had a map which indicated ‘minutes’, then you could distinguish down to approximately a mile. If the map indicated “seconds”, then you could pinpoint the exact center down to approximately 100 feet. Think of it as grids within grids… It’s just a matter of having the right map which overlays latitude and longitude down to the resolution that resolves for your purpose.